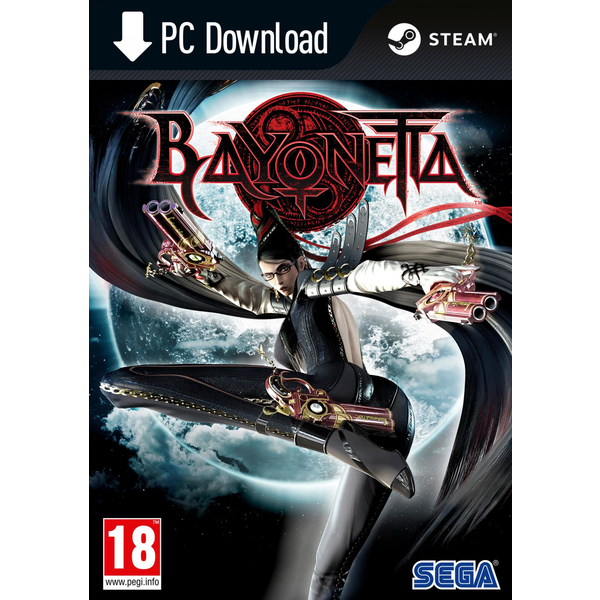 From PlatinumGames’ legendary director Hideki Kamiya of Resident Evil and Devil May Cry fame, SEGA brings one of the most universally acclaimed character action games of all time to PC.

Bayonetta. The last survivor of an ancient witch clan who keep the balance between light, dark and chaos. Entombed to protect herself – and the world as we know it – Bayonetta is discovered and revived after 500 years, sparking a chain of events with cataclysmic repercussions.

Thrust straight into battle, with only one clue to her past, Bayonetta must discover the truth and fight for the future. Her daunting conquest sees her face off against countless angelic enemies and giant foes in a game of 100% pure action.

BAYONETTA ON PC IS BEST EXPERIENCED WITH A CONTROLLER

Deadly Grace
An alluring, stylish and all-action heroine unlike anyone else on the gaming landscape, Bayonetta is ready to push your senses to the limit.
Climax Action
Over-the-top action in extreme environments resulting in continuous high levels of tension and excitement – Bayonetta pushes the genre into new realms of intensity.
Extravagant Combat
Bayonetta wields an impressive arsenal of weapons through an intuitive and fluid combat system, unleashing deadly combos and special attacks with devastating results.
Supernatural Powers
Unleash gruesome torture attacks such as the Iron Maiden, Guillotine and more to finish off enemies and send them to hell.
Full Steam Support
Steam Achievements, Steam Cloud Save, Trading Cards, Leader Boards, and Big Picture Mode.
Enhanced PC Graphics Options
Unlocked resolutions up to 4K, anti-aliasing, anisotropic filtering, SSAO lighting, scalable texture and shadow quality, and more.

© SEGA. Developed by PlatinumGames Inc. SEGA, the SEGA logo and BAYONETTA are either registered trademarks or trademarks of SEGA Holdings Co., Ltd. or its affiliates. All rights reserved. SEGA is registered in the U.S. Patent and Trademark Office. All other trademarks, logos and copyrights are property of their respective owners.