Microsoft account is required for game activation and installation.

Experience the new part of the most popular flight simulation ever. From small single-engine airplanes to wide-body jets, fly highly detailed and stunning aircraft in an incredibly realistic world. Create your flight plan and take off anywhere on the planet. Enjoy flying day or night and face realistic, challenging weather conditions.
Vivid and detailed landscapes
Dive into a vast and beautiful world with over 1.5 billion buildings, 2 trillion trees, mountains, roads, rivers and much more.
Living World
The earth is alive and constantly changing - as is the world of Microsoft Flight Simulator with live traffic and real-time weather.
Highly detailed airplanes
Every airplane has highly detailed and highly accurate cockpits with realistic instrumentation.
New checklist system
Customized settings - from fully manual controls to a fully guided first flight with interactive checklists and instruments.
Live weather
With the new weather generator you can switch on the live weather mode and experience real-time weather, including all details.
New day and night generator
Climb into the aircraft at any time of the day or year and navigate under visual flight rules, night VFR and IFR.
Flight simulation models
A state-of-the-art physics engine with over 1,000 control surfaces per aircraft simulates a realistic experience.

Performance can be scaled accordingly to high-end systems.
Not supported under Windows 10 in S mode. 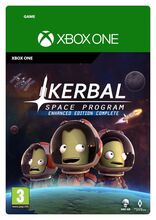 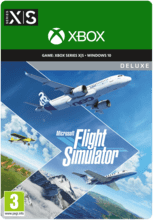 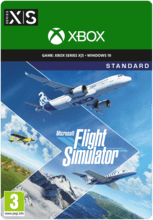