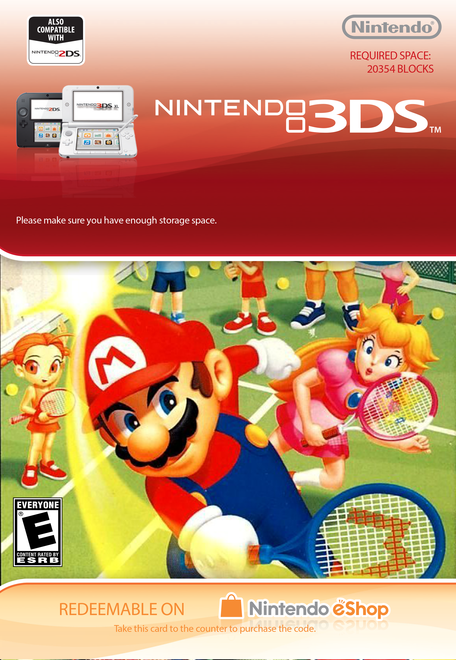 The screen may be smaller, but Mario Tennis is every bit as fun on Game Boy Color as it is on Nintendo 64. Created by Camelot Software Planning, the same team who developed the N64 version, Mario Tennis for Game Boy Color is a much different game to its 64-bit brother. The play control is still awesome and the tennis action is as fast-paced as ever, but the Game Boy version features a rich RPG-style approach to the gameplay.When the game begins, you have the choice of playing as either a male or female character. After naming your new alter-ego, you enter a sprawling Tennis Academy and begin your quest to become the best tennis player in the school.

Your character starts out with pathetic stats and poor equipment, but as you complete training programs and defeat other students you gain experience points. These points are used to increase your abilities, which make it easier to win matches. When you're not raising a racket on the court, you can guide your character anywhere you'd like on the Academy grounds. There's a cafe where you can grab a snack, a dormitory where you can relax, a repair counter to upgrade your equipment and even a workout room. Of course, you'll find tennis courts everywhere.Your tennis career begins in the Junior Class, where you have to prove yourself on the court against established players. If you can work your way to the top, you can move up to the Senior Class where the competition becomes much more heated. Once you've earned enough experience points by beating your Senior Class opponents, you'll ultimately be invited to play on the coveted Varsity Court. Reaching the top isn't a one-person job, though.

Whether you're playing as a male or a female, you're assigned to live with a roommate the moment you enter the Academy. This person is your doubles partner, and if you want to be a competitive team you'll have to share your experience points with your new friend. Even if you're the best singles player to ever grace the court, you still have to work your way up from the Junior Class when you start playing doubles matches.In addition to the deep Mario Tour Mode described above, Mario Tennis features other modes that are designed to entertain players looking for instant gratification.

Exhibition Mode allows you to play as Mario, Yoshi, Bowser and other big Nintendo stars in a winner-takes-all singles or doubles match. You'll find nine challenging accuracy tests in Mario's Mini-Games, and a complete list of tennis terms in the Dictionary. Best of all, Mario Tennis allows two players to compete against each other by using the Game Link Cable. This mode is extremely smooth and makes for some incredibly intense matches.

One of the most amazing features of Mario Tennis for Game Boy Color is that you can transfer your own custom characters to the N64 version of the game by using the N64 Transfer Pak. It's awesome to see your character make the leap from pixels to polygons, and after you play a match on Nintendo 64, your experience points are transferred back to the Game Boy game. Unlike Pokémon Stadium, the Transfer Pak does not allow you to actually play the Game Boy game on your Nintendo 64.

Without a doubt, Mario Tennis is one of the most rewarding games available on Game Boy Color. The tennis action feels great, and you get a real sense of accomplishment from earning experience points and improving your character.