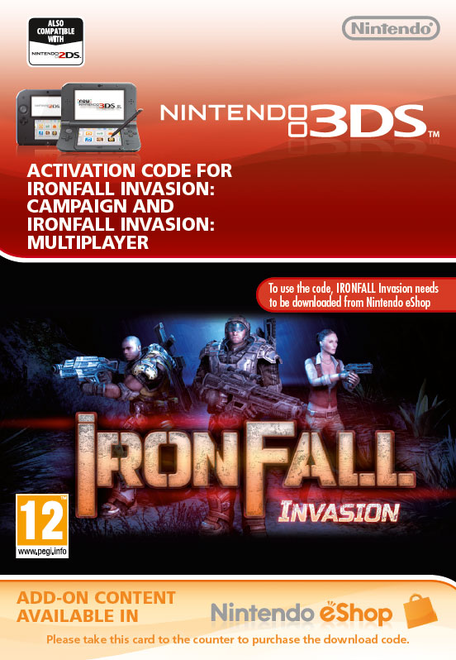 To use the code, IRONFALL Invasion needs to be downloaded from Nintendo eShop

NOTE: Please ensure you have enough free space on the SD card before downloading.

Only available in countries in which Nintendo eShop is fully supported.

The game can only be played on the system with which it was downloaded.

WARNING: Viewing of 3D images by children aged 6 (six) or under may cause vision damage. Use Parental Controls to restrict the display of 3D images.

This code allows you to gain access to the full single-player mode, plus 78 challenges and to 6 multiplayer arenas, 6 multiplayer characters, 8 multiplayer weapons and the Survivor mode.

As a bonus for purchasing both codes together as a bundle you gain access to an additional multiplayer mode weapon, the HR Pistol and you also receive the jukebox mode, allowing you to listen to the game's soundtrack at your leisure.