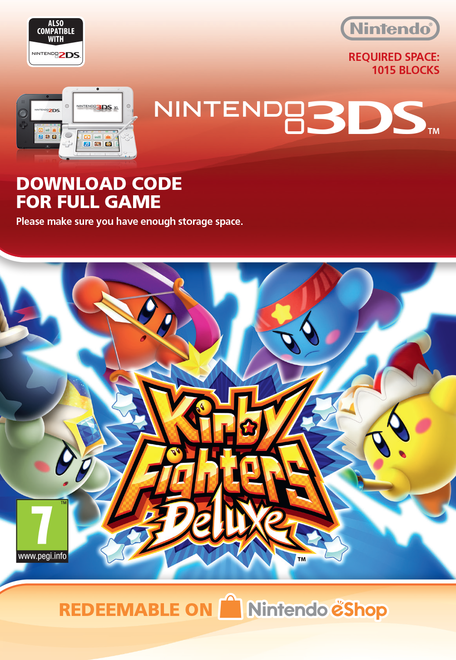 Dive into the fighting action as a lone fighter or against three friends via Local Play, and empty their health bars before yours runs out! Pick from 10 different versions of Kirby, each with their own colour and Copy Ability. Each Copy Ability has unique special attacks: as Archer, shoot arrows and hide behind cardboard scenery, or select Bomb to throw or roll explosives that detonate on impact!

There are 11 colourful and dynamic arenas to fight in, and you?ll often have ledges and platforms to attack your rivals from. Jump or float to avoid getting hit, and make sure you dodge hazards and enemies in the levels themselves ? no-one wants to get splatted in Springy Hand Land or toasted in Haldera Volcano! Even if you do get defeated, you?ll turn into a Ghost Kirby, damaging other fighters on contact ? dole out enough hits in this form and you?ll come back as your original Kirby to carry on the fight!

It?s not just you and your Copy Abilities, though: you?ll find a lot of useful items littering the stages, such as food and drink to replenish your health, cannons, spike balls and attack stars to bash your opponents good, and even speed bonuses and invincibility! All you need to do is destroy the crates they come in?

To keep the action balanced, you can set options like the number of items and hazards, whether Ghost Kirby characters are active, and the handicap level, which makes sure everyone?s got a fighting chance, irrespective of skill. Even without four players, you can opt for customisable, computer-controlled Kirby characters to fill in. There?s also Team Play, with a two-on-two set-up, where each pair of players can share item effects, or even unleash the Team Cannon for maximum impact! Plus, you only need one copy of the game for four friends to compete via Download Play!

If you prefer to go head-to-head on your own, Single Player boasts eight rounds to survive, plus a boss to topple at the end. Each victorious playthrough nets you an unlockable costume based on the Copy Ability you used, and if you beat the Very Hard setting you?ll unlock a special surprise! Of course, to get this good takes time, so hit up the Training mode to hone your skills against computer-controlled Kirby opponents using all the Multiplayer options. Practice makes perfect!