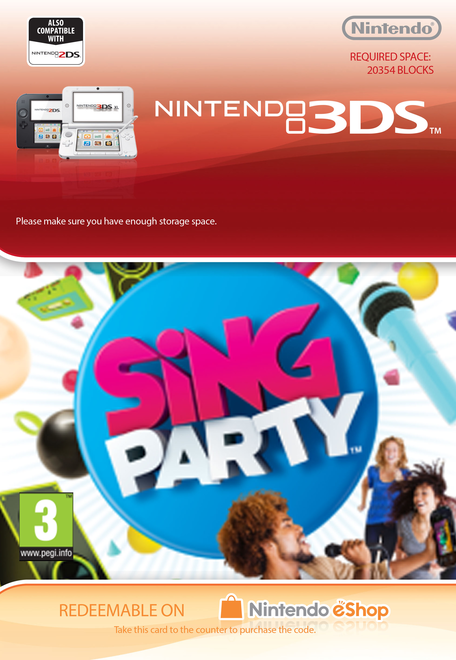 Get ready to lose yourself in the music in SiNG PARTY for Wii U! The game is a full-on singing and dancing extravaganza for all your family and friends, with a broad mix of songs from all-time classics to modern party favourites ? and a unique set-up to get everyone in the room on board. The game features...

Get ready to lose yourself in the music in SiNG PARTY for Wii U! The game is a full-on singing and dancing extravaganza for all your family and friends, with a broad mix of songs from all-time classics to modern party favourites ? and a unique set-up to get everyone in the room on board.

The game features a variety of modes that establish dynamic roles for everyone in the room. Party Mode is at the heart of SiNG PARTY. The lead singer, holding the wired microphone included with the game, is not looking at the TV screen but reading the lyrics and performance cues off the Wii U GamePad. This allows the singer to interact with the crowd, who are invited to become part of the performance by following their own lyrical and dancing instructions shown on the TV screen. Other players can also pick up a Wii Remote to make the sound of a variety of instruments, such as a tambourine ? or a cowbell!

In Sing Mode you?ll be reading the song lyrics on the TV screen as you test your vocal qualities getting real-time feedback. You?ll be judged not only on the Pitch of your singing voice but also its Power and Flair, so don?t be afraid to give your favourite tunes your own spin on your way to setting a new high score! Sing Solo or in a Duet with a partner ? and, if you?re feeling particularly confident, give the Harmony Duet option a try! Meanwhile the audience can pass the GamePad around to already queue up the songs they?ll be singing next, jam along with the music or use the mixer to play around with the audio; it?s possible to mute the music, so the singer ? or the original artist ? performs a cappella, or you can tone down the volume of the original artist?s voice and add a reverb effect to the singer?s performance.

Things get more competitive in Team Mode, which lets you team up and face off against your musical nemeses to battle for supremacy across several game types. You could be competing for the best solo section or singing together as if you formed your own pop group ? but only one team will win! If an impartial judge is at hand they can be appointed to rate each team?s performance, passing judgement on their mates using the GamePad.

You can also use Practice Mode to rehearse your solo parts and tricky sections of a particular song. The GamePad makes it easy to select a specific part and loop it until you get it just right. There?s definitely an incentive to come out on top as the awards that you win in SiNG PARTY can be posted to Miiverse for all your friends to see!

From current hits like "Call Me Maybe" by Carly Rae Jepsen, "Glad You Came" by The Wanted, "I?m Yours" by Jason Mraz and "Just A Kiss" by Lady Antebellum to pop classics such as Queen?s "Don?t Stop Me Now", "You Can?t Hurry Love" by The Supremes and "I Want You Back" by Jackson 5, SiNG PARTY delivers a smashing party playlist with dozens of songs for players of all ages and musical tastes.

Whether you?re new to performing or a regular showboat, SiNG PARTY ensures an instant party in your living room that will get even the most dedicated wallflower on their feet. The game will be bundled with a single microphone and supports a second one (sold separately).