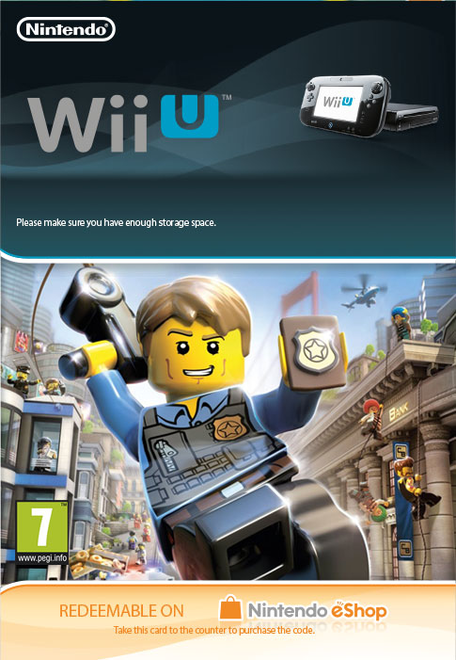 Spring into action as a super cop and bring the crooks of LEGOÂ® CITY to justice! LEGOÂ® CITY Undercover on Wii U offers all the classic gameplay, awesome action and unique humour players have come to expect from LEGO video games ? and a whole lot more too. This action title combines platforming, puzzles,...

Spring into action as a super cop and bring the crooks of LEGO® CITY to justice! LEGO® CITY Undercover on Wii U offers all the classic gameplay, awesome action and unique humour players have come to expect from LEGO video games ? and a whole lot more too. This action title combines platforming, puzzles, exploration, combat, HD visuals and an original story with plenty of laughs. Featuring heaps of thrilling missions, over 100 unlockable vehicles and unlockable characters too, LEGO® CITY sure is a busy place to hang out!

As legendary police officer Chase McCain ? an expert in disguises who's also a skilled free-runner ? you?ll go undercover on the trail of escaped criminal Rex Fury. Use different outfits and a variety of skills to hunt down that jailbird and put him back in the slammer!

Chase can step into the shoes of a Miner, Construction Worker, Robber, Fireman, Farmer and more. As a Police Officer in uniform Chase can use his Communicator device to search the area for clues or snap pics of suspects, and his Grapple Gun helps him reach higher areas, swing on poles, or pull things down. As a Miner, Chase can smash boulders and use dynamite ? sure to be an explosive experience! Whether it?s solving puzzles, accessing secret areas, or following the story, each disguise is bound to come in handy.

Chase McCain is a proper parkour professional: a whizz at climbing, jumping, swinging, somersaulting and generally being far too agile for words. Your brill skills will come in handy because LEGO® CITY just happens to be packed full of free-running courses ? tackle these and you?ll get to explore tons of the city, pocketing plenty of cool stuff on the way! Our hero is also a martial arts expert and, quite frankly, LEGO® CITY is full of dirty crooks and frenzied felons who want to have a go at him. As well as throwing his own blows Chase can counter, grab and throw his opponents ? and sometimes a move will put you in ultra-impressive slow-motion too.

In this urban adventure you?re not just locked down with levels or handcuffed to the hub ? the city is a massive open world for you to explore. Enjoy true freedom as you explore the seamless, high-definition grandeur of bright lights, LEGO® CITY. Head anywhere you want to go, hunting high and low (literally!) in your hot pursuit of Rex Fury.

Lost in the city? No chance! With a handy bird?s-eye view of the area shown on the Wii U GamePad?s touch screen it?s easy to get your bearings. The GamePad acts as your police Communicator, scanner, map and much more. With the GamePad in your hands you can scan for clues, photograph felons, receive mission updates and even see through walls. This personal satnav also helpfully records the locations of any landmarks or collectables you happen to pass by so you can go and investigate them later?

Get your minifigure mitts on more than 100 unlockable vehicles (including cars, trucks, speedboats and helicopters) and make your way about town in something a bit more ?your speed?. But that?s not all, you can also unlock hundreds of the inhabitants of LEGO® CITY as playable characters too. LEGO® studs are the currency of this brick-based burg, and they?re everywhere: piled in corners, lined along rooftops, even trailed up walls! You?ll need loads of studs to purchase all the unlockable vehicles and characters in the game, so stuffing your pockets is well worthwhile if you want to collect everything.

Explore a huge open world, unlock 100+ vehicles, and put Rex Fury away for good in LEGO® CITY Undercover on Wii U.