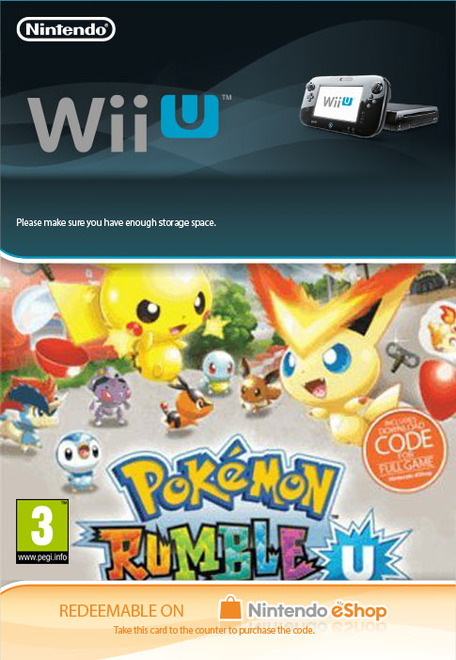 Available to download from Nintendo eShop, Pokemon Rumble U brings the fun of the Pokemon Rumble series to Wii U. Intuitive controls let you easily play through your quest solo or with friends.

Up to four players can enjoy multiplayer battles, featuring co-operative play to defeat the strongest enemies with teamwork, or friendly competitions to see who can defeat and befriend the most Pokemon.

Pokemon Rumble U features every last one of the 649 Pokemon that have been discovered as far as Pokemon Black Version 2 and Pokemon White Version 2, and hundreds of moves to master in battle. And the more Pokemon you defeat, the more Pokemon you can befriend, each with different strengths and weaknesses that will shape your battle strategy.

Other surprises and pick-ups will crop up along the way ? which will help strengthen the team, restore health, or cause damage to the opponents. Pikachu and friends will encounter Giant Bosses, and players can even use the Wii U GamePad to set off Touch Bombs when faced with many Pokemon in battle at once!