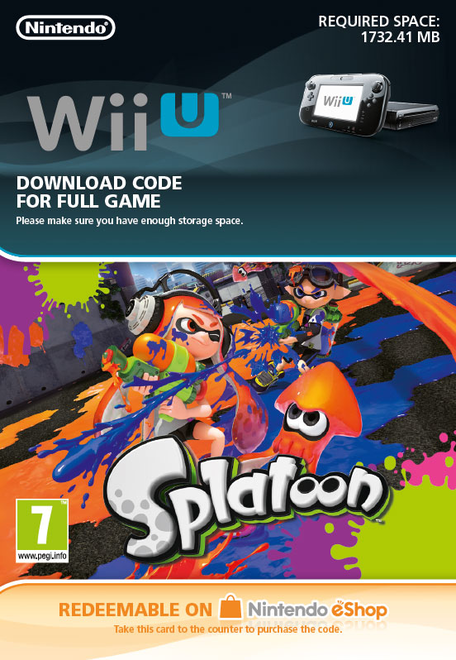 Splatoon - Download Code for Full Game NOTE: Please make sure you have enough storage space. Redeemable on the Nintendo eShop. The code can only be redeemed on one system. Can be used with: Wii U console. To use online features, additional storage may be needed. If you don't have enough system storage...

NOTE: Please make sure you have enough storage space.

Redeemable on the Nintendo eShop.

The code can only be redeemed on one system.

Can be used with: Wii U console.

To use online features, additional storage may be needed. If you don't have enough system storage in the Wii U console, please use a compatible USB storage device (for a list of such devices, see the Nintendo website).

Splatter enemies and claim your turf as the ink-spewing, squid-like characters called Inklings in Nintendo's new third-person action shooter game for the Wii U console.

Compete in four-on-four matches, in which the goal is to get your ink on as many places as possible and claim your turf, all while strategically submerging yourself in your team's colors and blasting your enemies. This is a colorful and chaotic online third-person action shooter ? exclusively on Wii U.

Fresh content: New weapons, modes, maps, gear, and more have been added to Splatoon, with more rolling out through summer 2015. Plus, regularly scheduled Splatfest events let you choose a side and battle your way to victory with other players around the world!

- Create a squid squad with your friends in Squad Battle mode.

- Join up to seven friends in Private Battles?you choose the map and the rules.

- Get teamed up with other players for 4 vs. 4 matches in Turf War or Ranked Battle modes.

- Ramp up the intensity with Ranked Battle modes which include three rotating modes: Splat Zones, Tower Control, and Rainmaker

- Play to win and boost your player ranking or level, or get in-game currency to spend on gear upgrades.

Think while you ink

- Strategy is everything. Defeat enemies to splatter them in an explosion of ink, covering more turf for your team. But choose wisely: Players who only go after the enemy might find their turf redecorated in their enemies' colors.

- Refill ink tanks, hide from opponents or move faster by turning into a squid and diving intoink with the tap of a button.

- Covering more territory with ink unlocks powered-up super weapons that can be used to attack rivals or cover more turf.

- Select between multiple control options on the Wii U GamePad controller, including using gyroscopic controls to look around, allowing for better aiming and control.

- Hone your skills in Octo Valley, the single-player mode that will have you inking, splatting, and squidding through platforming puzzles as you take on the Octarian army.

- Battle a friend one-on-one at home in a balloon-splatting contest in Battle Dojo.

"More free content is planned for the rest of the summer and fall?Sounds good to me!" - Destructoid

"The best online game to come from Nintendo" - Examiner.com

"Stands out as new and different" - GameSpot