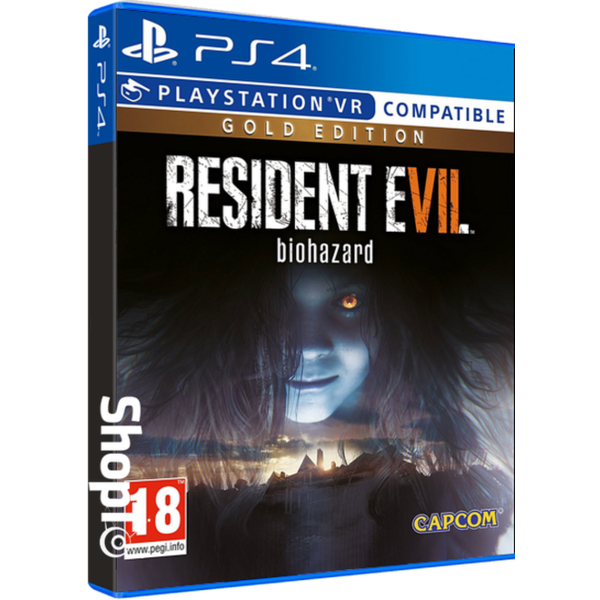 Resident Evil? 7 biohazard Gold Edition will include all the contents from the critically acclaimed release earlier this year along with all three pieces of downloadable add-on content, in one ultimate horror package. These previously released DLC packs - Banned Footage Vol. 1 and Banned Footage...

These previously released DLC packs - Banned Footage Vol. 1 and Banned Footage Vol. 2 will be included as well as the upcoming third DLC release End of Zoe. End of Zoe is the third piece of DLC and is included in the Gold Edition. This latest shocking instalment of the Resident Evil 7 biohazard saga sees players discover what Zoe?s fate will be. Players will face off against new enemies and explore new swamp filled areas.

FEATURES: Resident Evil 7 biohazard - Experience one of the scariest, most highly acclaimed games of 2017. As Ethan Winters, explore the seemingly abandoned Baker mansion and uncover the truth behind the disappearance of your wife.

Banned Footage Vol. 1 - Nightmare:  Trapped in a basement full of unknown horrors, you must fight for your life? - Bedroom: Tied to a bed, you must try to escape while avoiding Mother's watchful gaze? Includes the extra bonus content Ethan Must Die.

Banned Footage Vol. 2 - 21: Take part in a twisted card game where the stakes are your life? - Daughters: Experience the events that unfolded on the night it all started, when the downfall of the Bakers was set in motion? Includes the extra bonus content Jack's 55th Birthday.

End of Zoe - a mysterious outdoorsman named Joe who lives along the bank of the marshes and has a chance encounter with Zoe that sets both their fates in motion.

Not a Hero - Available as a free update on launch to all game owners, Not a Hero sees the return of Resident Evil fan favourite and veteran BSAA soldier Chris Redfield in a brand new experience, separate to the main game