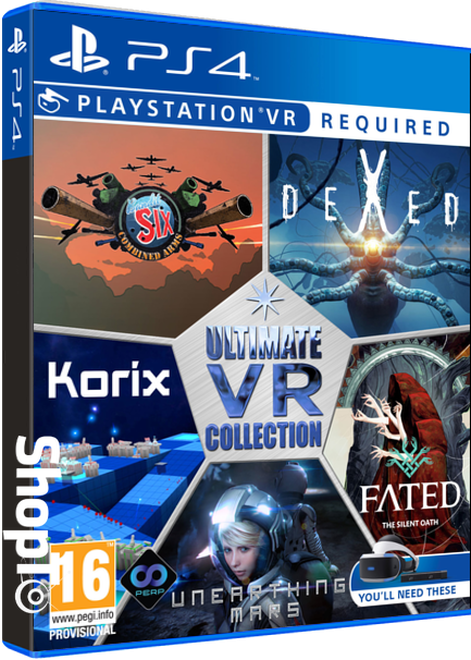 5 Amazing Games From Ninja Theory, creators of Heavenly Sword and DmC: Devil May Cry comes DEXED. An on-rails VR shooter where DEXterity is a must. From the critically acclaimed studio, Climax, comes Bandit 6 Combined Arms. 2 games in 1. Combining all the action of being a tail gunner in WW2...
5 Amazing Games

From Ninja Theory, creators of Heavenly Sword and DmC: Devil May Cry comes DEXED. An on-rails VR shooter where DEXterity is a must.

From the critically acclaimed studio, Climax, comes Bandit 6 Combined Arms. 2 games in 1. Combining all the action of being a tail gunner in WW2 and fighting with stationary turrets on beach heads in Bandit 6 Salvo.

Unearthing Mars is a VR adventure game set on the mysterious Red Planet. Fight, drive, experience a spaceflight simulation and much, much more.

Fated is an immersive game with stunning visuals, showcasing the best that VR has to offer, . Fated has a strong story-driven, narrative experience that focuses on emotion.

With both single and Multiplayer (2-4) mode, Korix is a fan favourite and is one of the only PSVR real time strategy games.

Target and shoot flurries of enemies with two blasters, one launching ice to destroy fire and the other shooting fire to destroy ice. Journey through beautifully realized worlds

Hone your skills in Challenge Mode before taking on the endless battle of Arcade Mode.

Gain multipliers by tagging as many enemies as possible before releasing a barrage of missiles and use your shield to defend against incoming attacks.

For a more chilled experience, admire and explore the diverse worlds of DEXED free of enemies in Zen Mode.

With global and friends leader boards to top, DEXED is the home of arcade-style shooting in VR.

In Bandit 6, you are a tail gunner, facing the enemy's deadliest aerial weapons amidst skies full of tracer, flak and planes.

In Bandit 6 Salvo, you enjoy the more strategic and beautifully cell shaded defence game. Defend or die from the beaches of Britain, the snowy ruins of Stalingrad and the sun baked Pacific against hordes of enemy helicopters, tanks, jeeps

Unearthing Mars is a VR adventure game set on the mysterious Red Planet.

Carrier-class spacecraft Sentra has arrived in Mars orbit, tasked to retrieve remnants of the missing explorer satellite Phobos. What they will uncover instead are the possible vestiges of an ancient civilization.

As Co-Pilot of the retrieval team, the player will have the full experience of a space explorer on Mars.

Unearthing Mars provides hours of unique gameplay experiences, ranging from navigating a landing craft through a sandstorm to driving a Mars rover.

From puzzle-solving to first-person shooting, the game will allow players to resolve challenges from a variety of game genres

- Story -- Unravel the mysteries of Phobos

- Simulation -- Experience space flight and landing through the cockpit

- Driving Simulation -- Explore the Red Planet with the rover vehicle

FATED: The Silent Oath is a first-person immersive adventure set in the mythical age of Vikings and built specifically for Virtual Reality.

Written by Assassin?s Creed writer Jill Murray, FATED tells the story of the exile of a man and his family during Ragnarök ? the end times.

As he travels with them, he comes across a mix of touching and terrifying events, learning about himself and his loved ones, taking the players on an emotional rollercoaster that occurs all around them in 360 degrees.

FATED explores compassion, sadness, happiness and other complex emotions. Nothing is stronger than the connection between a parent and his child, which is designed to strike a sensitive chord with players in FATED.

Real-time strategy has been crossed with tower defence to provide retro-styled game-play reminiscent of the late ?90s.

Korix features a re-playable 3 to 5 hour campaign, skirmish and online multiplayer (2 to 4 player co-op or vs).

Running at native 120fps, Korix pushes PlayStation®VR to its limits and with smooth and snap movement options, Korix is suitable for the most sensitive players.

Korix places you deep in space, fighting for your race?s survival after your home world is destroyed.

With nothing left to lose, you are put in the role of commander, with the sole mission of taking the fight back to the enemy.

Build up your defences, capture the resources and build your own army to exact revenge. You will not go down without a fight!