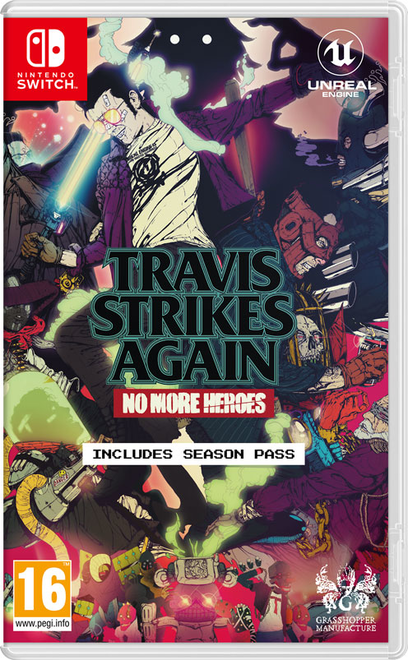 The otaku assassin returns!
Travis Touchdown wanders into the game world and embarks on a rampage of epic proportions in Travis Strikes Again: No More Heroes for Nintendo Switch! Beam Katana in hand, slice and dice through a variety of game worlds, then square up to the boss at the end of each game!

The story so far
Several years after No More Heroes 2: Desperate Struggle, Travis is living his best life in a trailer in the American south, along with his pet cat Jeane. The open air, absolute freedom and plenty of video games?what more could an otaku assassin want?
That is until Badman, the father of Travis? past opponent Bad Girl, shows up to exact revenge for Travis? role in her demise!

Get into the game ? literally!
During the ensuing battle, things go horribly wrong and the two are sucked into the Death Drive Mk II ? a legendary gaming console that plays games using mysterious objects known as Death Balls. It?s said that collecting all six Death Balls ? and beating the games that they contain ? will grant the successful player one wish?

Now Travis and Badman must put aside their differences, team up and fight their way through several game worlds in a bid to gain that elusive wish, exterminating every last Bug as they go.

Each virtual world has its own vibe, from straight-up battle-action to puzzle-action, so you never know exactly what you?re going to get ? except loads of hack and slash combat! Tear through hordes of Bugs, using Travis? Beam Katana or Badman?s trusty bat, and don?t stop until each game?s boss is annihilated!

Two can play that game

Two players can battle side-by-side co-operatively with a single Joy-Con each, so pass a Joy-Con to a friend* and destroy Bugs as a duo! Use Skills to squash Bugs in seconds, or bring the pain with super effective Charge Attacks that wipe out most enemies with ease. In co-op play, combine your powers to unleash a simultaneous Charge Attack on any unfortunate foes ? they won?t know what hit ?em!

After clearing a game world, jump on your motorcycle and seek out the next Death Ball in hilarious adventure scenarios starring Travis. Or just chill out in your trailer, reading all about games and ramen.

As an avid gamer and otaku culture aficionado, Travis Touchdown?s wardrobe wouldn?t be complete without a wide range of t-shirts. In Travis Strikes Again: No More Heroes, he shows off his indie cred with tons of tees based on real-world indie games, including Dead Cells, Morphies Law and Hyper Light Drifter.

You can expand this action-filled adventure with downloadable content! The physical version, available at retail, comes packaged with a code for the Travis Strikes Again: No More Heroes ? Season Pass, or if you choose to buy it on Nintendo eShop you can purchase the Season Pass separately.